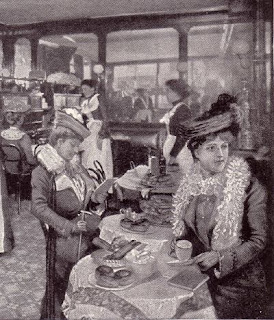 Although tearooms might seem pleasant if unexciting places today, they marked an important change in how people ate and drank out. Prior to the late Victorian and Edwardian flourishing of tearooms and cafes, it was hard for women to find anywhere cheap and respectable to eat on their own. A pub or coffee shop would not be socially respectable enough for many women to have their lunch at, for many at this time were male-dominated drinking houses, or were rather dingy and seedy in character. Ther alternative would have been to order a weighty meal in the restaurant of a hotel, which was expensive, and certainly beyond the budget of the new working women who were being increasingly employed as office workers in the city.
The first tearoom in Britain was opened by Stuart Cranston in Glasgow in 1875. As a tea dealer, he saw a demand for an area in his rooms where people could sample the tea he sold. In 1878, his sister, and tearoom entrepeneur, Catherine, opened her own premises in Argyle St. There was clearly a demand for this sort of refreshment, as she soon opened tearooms at Ingram St and Buchanan St, and later at Sauchiehall St.
Tearooms came at a similar time to London, in part as spin-offs from bakery chains. In 1884, the ABC Aerated Bread Company opened its first tearoom, and the Lyons its first tearoom in Picadilly in 1894. Other firms which soon had numbers of tearooms included Lockharts and the Express Dairy, as well as independently run establishments. The picture above shows ladies having tea in a confectioner's shop in Picadilly, from George Sims' 1901 publication, "Living London". As Sims says, confectioners, pastry cooks and sellers of chocolates also saw the advantage of including a tearoom within their shops.
What tearooms offered was cakes, scones, tea and coffee, as well as more substantial meals like sausages and eggs in non-alcoholic and clean and comfortable surroundings. A menu of the time indicates that you could have a cheap snack of tea and bread and butter for a bun or 5d, Welsh Rarebit and coffee for 7d, or instead a more expensive high tea for 9d. So tearooms catered for most budgets, as well as providing somewhere warm and and pleasant to sit. No wonder that tearooms proved very popular with women and families, as well as with many male city workers.
Arguably, tearooms reached their height in Glasgow in Edwardian times, under the management of Kate Cranston, who commissioned Charles Rennie Mackintosh to design her furniture and interiors. Mackintosh used geometric motifs and inset panels of glass or mirror in a highly original way.His elegant and striking designs included the Ladies Luncheon Room in her Ingram St premises, with its white painted interior offset by dark oak chairs and stained glass panels. He also designed rooms for her in 1904 in the Willow tearooms in Sauchiehall St. These include the famous Salon de Luxe, which was based on a colour scheme of pink and purple with geometric panels of glass and mirror decorating the room and its furnishings. A recreation of this room is in use as a tearoom today, with a menu not too far removed from that of its Edwardian heyday.

oh I love this bit of history and your post is spot on. By the way, do you know anything about the painting?

I have clearly cited your work in my discussion on the early women's movement, but couldn't find a Link Icon on your page.