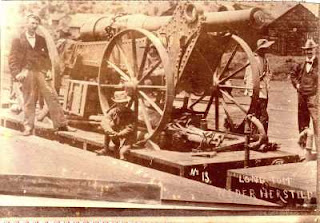 The Siege of Mafeking

The postcard opposite shows Boer fighters around a "Long Tom" gun, like the one which the Boers used to pound the inhabitants of Mafeking with shells. During the Anglo-Boer war of 1899-1902, which in many respects was also a South African civil war, three imperial towns were besieged with their garrisons by the Boers in protracted sieges: Kimberley, Ladysmith, and Mafeking. This tied down tens of thousands of troops on both sides of the conflict, both the Boer commandos who laid siege to the towns, and the British armies which tried to relieve them. Mafeking itself was besieged from mid October 1899 to mid May of 1900.
In his diary of siege, Sol T. Plaatje who worked as a court interpreter and secretary within Mafeking commented: "I am inclined to believe that the Boers have fully justified their bragging, for we are citizens of a town of subjects of the richest and the strongest empire on earth and the Burghers of a small state have successfully besieged us for three months". In fact, the siege was to last another three months, as the inhabitants were unable to break out, while the British relieving forces were held back, dogged by military defeats. In charge of Mafeking's defence was Colonel Baden Powell, of boy scouts fame. The defenders deployed a mixture of real and fake landmines around the perimeter, an armed white garrison with a little artillery, and armed men from the native Barolong population in the so-called "Black Watch". Whether or not native Africans were participating as armed combatants in the war was a great source of contention for the British and Boer authorities. All inside the town had to endure daily shelling by the Boer guns. Shells inflicted horrible injuries; curiously, those in the town bought and sold fragments of shell and indeed unexploded shells even while the siege was continuing: a trade in war souvenirs.
As part of maintaining the town's morale, Baden-Powell and others such as Lady Sarah Wilson organised what appears from the pages of the Mafeking Mail to be a never-ending village fete. Regular gymkhanas were held with prizes given for the best fancy dress. There were also frequent concerts, and even siege exhibitions or agricultural produce shows, in which prizes were awarded for the best livestock, fruit and vegetables, for the most ingenious objects made from Boer shells, for the best children's essays of life under siege, and for the best siege baby.
Life as experienced by the besieged did, however, differ sharply, depending on class and colour. Baden-Powel and his subordinates had designed the food rationing systems specifically to favour the white inhabitants, bulking out their rations by cutting back the black food supply to starvation level.
Although the rest of the world could not see exactly what was happening in and around Mafeking, papers such as the Daily Mail followed the siege with great interest. When Mafeking was finally relieved on 17th May 1900, in Britain, a huge outpouring of public opinion led to spontaneous public celebrations in the streets, hence the verb, "to maffick". Meanwhile in Sotuh Africa, after the besieged towns had been relieved, and the Boer capitals had fallen, the war was entering a new phase in which the British would imprison Boer and African civilians in concentration camps.