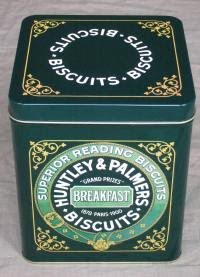 Huntley and Palmers dates its origins back to 1822, when Joseph Huntley, a Quaker, opened a biscuit shop in Reading. Joseph's son went into partnership with a fellow Quaker, George Palmer in 1841. Thereafter, the firm went from strength to strength, becoming a household name, and by 1900, was the largest biscuit business in the world. It sold not only to the British market, but also on the Continent, to the far East, and to the colonies. The company at first used the canal network to transport ingredients and the finished biscuits, and subsequently, the growing railway network.

A distinctive feature of the Huntley and Palmer brand was their eagerly sought after tins, which were made for the company by Huntley, Boorne, and Stevens. These tins allowed the biscuits to be transported freshly over large distances. However, they became attractive items in their own right. Ingeniously shaped tins with coloured printing were advertised in special catalogues and sold for the Christmas market: the more exotic designs include a pillar box, and their famous range of library tins, each devised to look like a row of classic books. The Huntley and Palmer Collection contains information on these superbly made Edwardian storage tins, and on the history of the company.

Customers who bought Huntley and Palmer's biscuits included Victorian coach and rail travellers, as well as those who by the Edwardian period were enjoying morning coffee and afternoon tea. Curiously, some biscuits were believed to have health-giving properties, such as the breakfast biscuit, which is advertised on the tin above; was invented in 1891 by Walter Palmer as a healthy yeasted biscuit that could be topped with butter or cheese. Even Captain Scott took some Huntley and Palmers biscuits made to a special recipe, with him on his 1910 expedition to the South Pole, some of which have survived and are now on display in the Antarctic Museum on Dundee waterfront.

Many of the biscuits familiar today date from Victorian and Edwardian times. These include the Ginger Nut, the Abernethy, and the Nice biscuit. The Garibaldi was invented in 1861 by one of Huntley and Palmer's rivals, Peek Freans, who also invented the Bourbon (first known as the Creola) in 1910. In 1892, Alexander Grant who worked at McVities in Edinburgh invented the digestive biscuit, so called because its baking soda was wrongly thought to aid digestion. So if you are looking for period biscuits to put in your biscuit tin, any of the above would be ideal.